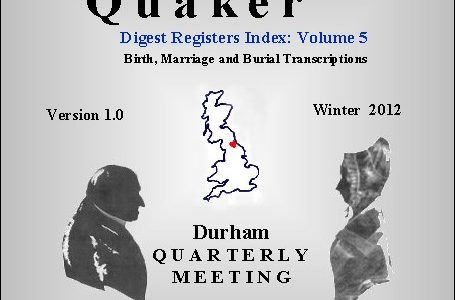 QFHS created indexes to the Digests for five of the Quarterly Meetings which were previously available on CDs. The indexes created were for Durham, Essex, Norfolk, Suffolk and London & Middlesex.

These 5 Indexes can now be consulted by using the buttons below.

Conventions used in the transcriptions:

As the original surrendered registers can now be viewed inline through commercial companies, there are no intentions to produce indexes for the remaining Quarterly Meetings.

These Indexes have been compiled from information contained in the Digests, shortening some texts (mainly in the description and residence columns) to save space. All the index files are in the sequence of surname, forenames and event date, unlike the Digests from which the entries have been transcribed. Although the Indexes have been double-checked and despite every care having been taken to avoid mistakes, regrettably there are bound to be amongst the 11,400 or so records some uncorrected errors.
In transcribing the Digest entries the intention has been to preserve the spelling of names of persons and places. The surname especially needs to be viewed with some imagination as there are numerous spelling variations. The contents of the description and residence columns have been subject to some editing. County names have been replaced by Chapman county codes (see Wikipedia, Chapman code).
The sequence of the columns in the Indexes differs from those in the Digests, the surname, forenames and date columns being shown first. The book and page number columns have been moved to the extreme right and beside each book no. is shown the TNA RG6 piece no. to facilitate finding the original register entries. The book and page numbers have been particularly difficult to read and may contain a larger proportion of errors.

Multiple entries: An event was often recorded in more than one register, e.g. by the Quarterly Meeting as well as by the Monthly Meeting, and perhaps also in local registers. If the entries were identical the Digest compilers combined them into one entry. In these Indexes both the QM book and page numbers and the MM book and page numbers have been shown against the entry. In many cases, however, there is more than one MM source for the same event; the index then has one entry for each, even if the other details are identical.